On May 12th, 2018 St. Hubert’s March took the streets of Warsaw for the first time. The event gathering mostly hunters, foresters, farmers and representatives of the fur industry, was organized by the Ecological Youth Forum (Ekologiczne Forum Młodzieży) to commemorate the centenary of Polish independence. One incident occurred during the parade when the police confiscated an artwork.

Its author protested the event by cycling along the march with a cart on which the poster critical of hunting was set up.[i] The collage depicts a couple posing over the body of a wild boar, presumably shot with a rifle held by the man, while the woman holds up a dead piglet. This trophy scene is set up against a white and red background, comprising a Polish national flag. The most controversial part of the piece is that the faces of both hunters are replaced with iconic depictions of Jesus Christ and Virgin Mary.[ii] This poster targeting the combination of national and religious symbolism featured in the parade was reported to the police as offending religious feelings under art. 196 of the Polish criminal law, one frequently used against artists like in the famous case of Dorota Nieznalska.[iii] The author of the “hunting holy family” portrait remains anonymous. What is significant in this work is the choice of a wild boar for the poster, given that St. Hubert’s iconography typically involves a deer. However, it becomes apprehensible if analyzed along the current context of the intensive fight against African Swine Fever (ASF) in Poland that is significantly transforming Polish hunting regulations and ethics. 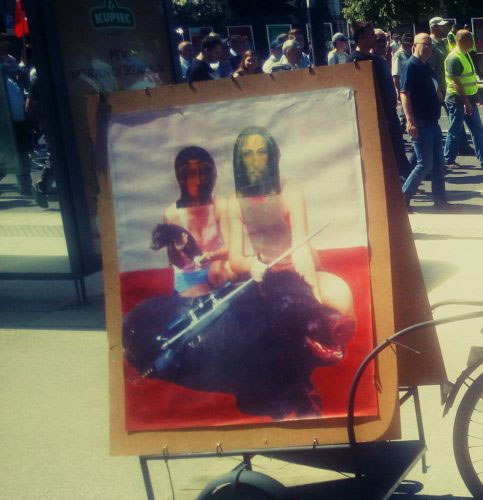 Photo by Robert Jurszo. Author of the poster is anonymous. Source: https://oko.press/policja-aresztowala-dzielo-sztuki-podczas-marszu-sw-huberta-bo-rzekomo-obrazalo-uczucia-religijne/

In January 2018, president Andrzej Duda signed a special law to combat the spread of ASF. This biosafety measure suspends some of the hunting restrictions, for example, allowing culling wild boars in reservations and national parks, assuring a system of paid leaves for hunters to encourage the reduction of the wild boar population, and introducing fines for anyone disturbing the hunt.[iv] Nevertheless, the most recent changes to the hunting legislation introduced in March 2018 lifted these fines targeting environmental activists actively sabotaging hunts. Among other hotly debated amendments passed in March, the ban on underage persons joining hunting trips and on training dogs using living bait, as well as allowing private land-owners to exclude their properties from being available for hunting, came to the disappointment of the hunting community.[v] It was speculated in the media that St. Hubert’s March might have been a form of protest against these recent changes in the Polish hunting law.

The official organizer of the march, the Ecological Youth Forum, is a conservative youth group that aims at “protecting the natural environment, hunting culture, Polish tradition and national identity.”[vi] They also pledge to combat “ecoterrorism,” a loaded term frequently used in the conservative discourse to denominate the activities and postulates of environmentalist associations such as animal rights activists and groups protesting environmental destruction.[vii] In this context, St. Hubert’s March is a newly established cultural practice with a strong national objective and invoking a seemingly age-long religious tradition through the patronage of the Saint. However, Agata Konczal shows that the cult of Saint Hubert in Poland is a much more recent phenomenon than it might seem.[viii] She dates its peak to the 1990s and analyzes it as an example of the “invented tradition”[ix] that developed mostly during post-socialist transformation. In her analysis, St. Hubert’s cult was mobilized to restore the elitism and prestige that hunting enjoyed in Poland before communism.[x] Applying this assessment to the current situation, it is worth noticing that in his discussion of the “invented tradition” Eric Hobsbawm singles out the modern nation (along with nationalism, the nation-state, national symbolic, etc.) as a case of special importance for analyzing this phenomenon.[xi] According to this framework, the strong connection between religious symbolism and national rhetoric observed in St. Hubert’s March further cements group cohesion and helps in legitimizing their political claims.

The nationalistic character of St. Hubert’s March can be read as a reminder to the government that in the eyes of the hunters the recent legal changes undermine traditional values and national heritage they claim to cultivate. In this sense, by depicting the dead boar as the sacrificial body and the “holy family” as the perpetrators of violence, the confiscated poster directly challenged the patriotic values and religious tradition championed by the participants of the march. It is worth mentioning that hunting advocates were especially vocal about preserving the “traditional family values” during the parliamentary discussions on allowing the participation of underage persons in hunting, arguing for the parents’ right to raise children in their faith. In the poster, the only “child” figure is the dead piglet, perhaps a commentary on the plans to introduce financial bonuses for culling pregnant sows and newborn piglets specifically, as another measure aimed at reducing the allegedly overabundant wild boar population.

This case reveals the central role of religion and conceptions of the nation in the re-invented Polish hunting tradition and its political practice. More importantly, it helps in highlighting the recent incorporation of the wild boar as a focal material and symbolic figure critically reshaping not only the hunting legislation but also wider discourses on the role of hunting in biosecurity. These two aspects are combined in the controversial artwork that challenges the fusion of patriotic and religious mandate that hunting enjoys in Poland by portraying the wild boar as the sacrificial body.